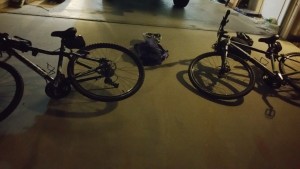 Well, we did it again, we rode over the Coronado bridge at the start of a 25+ mile Bike the Bay bike ride.  I was actually able to enjoy the view a little this year as I wasn’t stuck against the inside barrier sucking wind the whole time.   it was much more fun and relaxing than last year.  I have been riding back and forth to a friends house and either walking or biking for quite a few local errands recently.  Today i rode to the post office to start the process for a passport ( so we can go to Whistler at some point in the future )and then grabbed some lunch before heading home. 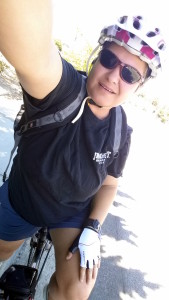 on another note, I have started a gofundme for my little sister, she needs a little financial boost to get a car on the road after some unexpected setbacks.  donate, or at least share if you have a mind to. and thank you very much for either one. http://www.gofundme.com/6y2ygntg

we headed out this morning at 4:45 AM, picked up by our friend Carl.  we headed out with 5 people and 5 bicycles all stuffed in his truck as his sister and brother in law joined us and we headed downtown. we got to the starting area and got our bike numbers strapped on and settled in to wait for the first wave to go out at 6AM. as we headed out there was a huge crowd and it took some time to get everyone moving.  john and i had already agreed that until we made it over the bridge we weren’t going to bother with trying to stay together since we knew that we would not be able to stay together up the hill (because i am a shitty uphill cyclist)

once i was across the bridge, john was there waiting for me and we pedaled the rest of the distance together.  slow and easy, often being yelled at by faster riders (LEFT, LEFT, LEFT!! when i was clearly as far to the right as i could be and still be on the path) who apparently didn’t get the ‘it is a ride, not a race’ memo.  we did not let that get us down, we just shouted back things like didn’t you get the ‘it’s not a race memo?’ and ‘so sorry, mr pro cyclist’ as they sped by us.

we rode 25.7 miles. there should be pics available for purchase of us at various points, and i look forward to seeing and perhaps even buying a few.  i tried very hard to be aware of the photo ops and smile and give a thumbs up so they wouldn’t have pictures of my ‘christ jesus, i am going to die’ face.

at the beer garden and post ride festival we got a cool yellow t-shirt, and a Giant Bicycle rep was chatting with us and was impressed at how i coordinated with my purple bicycle and he got a picture of john and i with our bikes as well, that was kind of neat.

on a related note, i tried like hell to stay hydrated, we stopped at all 3 rest stops to supplement my 100 oz camelbak reservior and drank a bottle of gatorade (purple, oddly enough) but still ended up with a bit of a migraine by the end.  we stopped for mexican food and i had a couple glasses of coca cola hoping the caffiene would help, but ended up taking ALL THE MEDS when i got home.  feeling much better now and still hydrating to keep the demon at bay.

to add to the insanity we are now verbally commited to another 25 miler in november with the same crazy people we rode with today.